From the 8th July 2014 guests will be able to finally step inside the wondrous Diagon Alley at Universal Studios, offering a multi-park experience sharing the two Wizarding Worlds of Harry Potter! 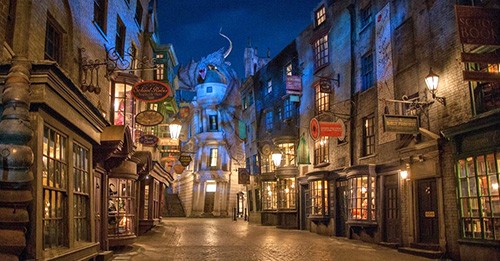 From the streets of London you enter Diagon Alley, where you will find all things 'wizardy' to experience and purchase gifts to take home with you. Immerse yourself in the magical atmosphere that has been wonderfully created, walk along the cobbled street taking in the sights of the quaint old shops either side.

Step inside Ollivanders: Makers of Fine Wands, where there are hundreds of wands waiting to find the right wizard!

Guests can dine at the Leaky Cauldron which offers typically British dishes, such as Cottage Pie, Fish & Chips and a Ploughman's Lunch to name a few. You can also sample the famous Butterbeer, Pumpkin Juice or a Wizard's Brew.

Further down the Alley you can sample some frozen treats from Florean Fortescue's Ice-Cream Parlour. They serve soft-serve and scooped ice-cream, as well as breakfast items, pastries and drinks.

At the end of Diagon Alley you will find the Gringotts Bank, adorned with the show-piece, fire-breathing dragon! Step inside if you dare to experience the brand new dark thrill ride 'Harry Potter and the Escape from Gringotts', a multi-dimensional roller coaster incorporating special 3D technology and effects.

Quality Quidditch Supplies - for sports equipment and clothing and of course brooms!

Wands by Gregorovitch - for an assortment of Harry Potter wand replicas

Scribbulus - for wizard or witch writing supplies, such as parchment paper, postcards, journals and feather quills.

5 Secrets from inside Harry Potter's Diagon Alley at Universal Studios

1. Perched on top of Gringotts Bank in Diagon Alley is a giant dragon, this dragon breathes out real flames every 15 minutes. It makes a fantastic photo opportunity.

2. Outside the entrance to Diagon Alley you can find a British red telephone box. Go inside and dial MAGIC you will hear a message from the Ministry of Magic.

3. You can purchase Interactive Magic Wands, these wands come with a map, the map shows the 34 locations of where you can use the magic wands (There are a few secret locations that are not listed on the map). Each location is marked with a bronze medallion embedded in the floor. When you locate the medallions, you must recite the spell name and do the wand gesture that’s listed to make the magic happen.

If you place your spell map under the black light when inside Knockturn Alley, the shapes of the spells that are written in “invisible ink” will appear.

4. If you go up to the Vanishing Cabinet Inside Borgin and Bourkes in Knockturn Alley you can hear a bird chirping inside.

5. You can buy Hogwarts school uniforms inside Madam Malkin's Robes For All Occasions. Try something on in front of the giant standing mirror, it may very well talk to you, but be warned, the mirror isn't always polite!