Magically gliding above the treetops of Walt Disney World Resort is the new Disney Skyliner which opened on Sept. 29, 2019. As much a magic carpet as a complimentary transportation system, Disney Skyliner will soar above waterways and wooded areas alike on its way to theme parks and Disney resort hotels, while wide-eyed guests will be treated to views never before seen. 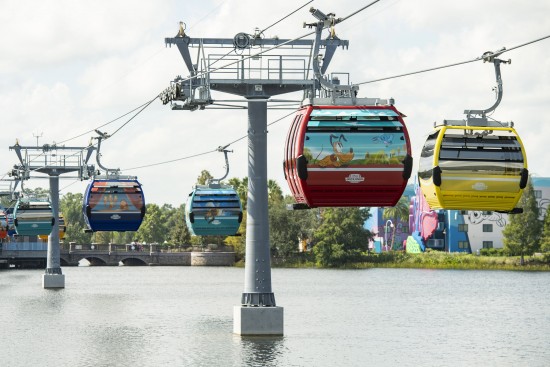 Nearly half of the approximately 300 Disney Skyliner cabins will be wrapped in whimsical Disney scenes – with beloved characters, fan-favorite movies, attractions and more – giving the appearance that Disney pals are riding along with guests. The cabins will be easy to spot overhead, because each gondola will shimmer in one of eight vibrant colors and feature sleek curved lines. 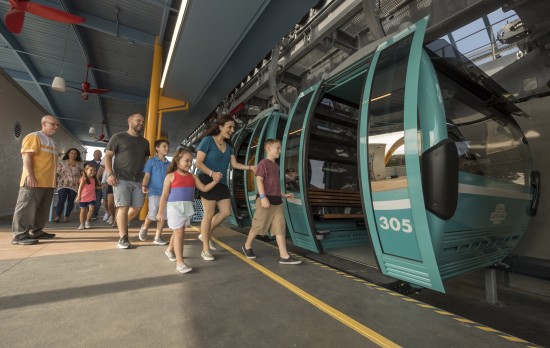 Disney Skyliner guests will discover bird's-eye views of Disney’s Hollywood Studios, including the Hollywood Tower Hotel. Approaches to Epcot are equally eye-catching, as the countries around World Showcase Lagoon come into view with iconic Spaceship Earth in the distance. 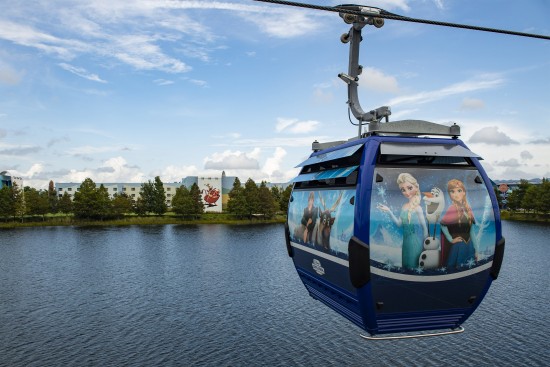 In addition to convenient theme park access, guests staying at Disney resort hotels accessible by Disney Skyliner will have quick-and-easy transportation to a world of other dining and entertainment options. These include all the fun of Disney's BoardWalk entertainment district, access to Epcot through the International Gateway station, and restaurants and recreation found at the resort hotels serviced by Disney Skyliner. 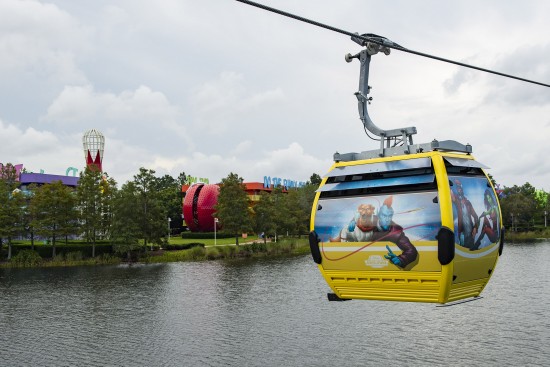 The artful stations along the Disney Skyliner route will feature uniquely Disney designs that reflect their surroundings:Joffrey’s Coffee & Tea Co.®, the official specialty coffee of Walt Disney World Resort, Disneyland Resort and Disney Vacation Club, will welcome guests with a quick-service location adjacent to the station at Disney’s Caribbean Beach Resort. The menu of coffees, pastries and specialty items will include the new “Toffee Flight Latte” found initially only at the station. The latte blends sea salt caramel toffee and dark chocolate, topped with toffee and chocolate crumbles and a cloud of whipped cream.

Disney Skyliner cast members will sport stylish costumes that reflect the sleek, contemporary lines of the transportation system. Costume designers created a mid-century design that recalls 1960s airline travel marking a new era of flight. Clean, streamlined designs of the gondolas are incorporated into the costumes as style elements.

Disney Skyliner joins the network of complimentary Walt Disney World transportation benefits for resort hotel guests allowing them to travel effortlessly around Walt Disney World with a touch of Disney magic. The gondolas join other favorite options such as the world-famous Walt Disney World monorail system along with ferry boats and water taxis, and one-of-a-kind motor coaches.