Gatwick Airport (LGW) is one of the main London airports, a major airport in the South-East of England and provides a choice of airlines that fly to Florida either Direct or Indirect. It was in 2017 the UK’s second busiest airport after Heathrow airport with 45.6 Million passengers transiting.

These are the 2017 figures that make interesting reading.

The airport is located approximately 30 miles to the south of London and is privately owned by a number of companies with 'Global Infrastucture Partners' being the majoity shareholder at 41.95%.The airport itself consists of two terminals, one main runway (with a secondary runway that can only be used when the primary runway is out of use) and its own train station with direct rail links into London. Coaches also run to Gatwick Airport, operating mainly to/from the South Terminal forecourt.

By road, access to the airport is via its own dedicated junction (J9) on the M23 motorway which leads to the M25 J27 and beyond to the wider road network.

Below is the general map of the airport showing the terminals and the local road layout; 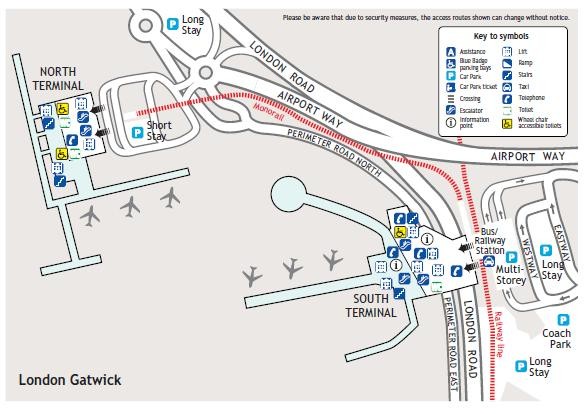 Which airlines fly to Florida from Gatwick Airport? 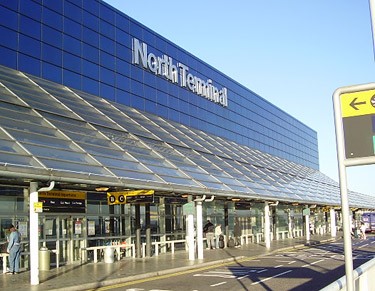 The North Terminal is the newer of the two terminal buildings althought the amount of invest and expansion of the years makes it hard to distinguish between the two.

The South Terminal was the original Gatwick Airport terminal built in the 1950's and is the busiest terminal of the two at Gatwick, expanded and rebuilt over the decades to meet the needs of today's travellers.

If arriving by Train or Coach you will arrive at this terminal.

Both Terminals have facilities for eating; these range from snacks through to full meals and have prices to suit most budgets.

The current list of places to eat and drink are;

Each terminal contains a wide variety of shops ranging from the likes of WH Smiths, Boots and Tie Rack through to Harrods and Ray Ban. The anchor duty free stores are called World Duty Free in both Terminals.

Gatwick Airport has Lounges in both Terminals. However some can be pre-paid and some cannot, these are only accessible to passengers flying in particular classes (Upper Class, Business or First Class) or frequent traveller levels with certain airlines i.e., British Airways Gold Cards and of course for those booked via Virgin Holidays the use of V-Room.

Gatwick Airport provides a webpage which details services available from parking to take off through the airport to assist passengers with children. This also includes details of pre-ordering baby milk for the flight.

Smoking at the Airport

Smoking at Gatwick Airport is restricted to outside locations (essentially at the front or near to the front entrance to each terminal) and all are before security. Once past security the airport does not provide anywhere for passengers to smoke.

The airport has many hotels either on-site or within a ten minute drive, additionally many other smaller hotels/B&B's are available and a search on a web search site such as google or via a travel website such as Tripadvisor would reveal them.

Some of the main hotels near Gatwick Airport are; 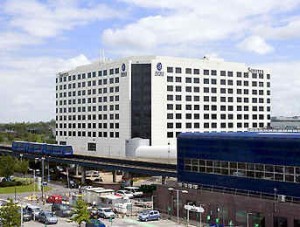 Sofitel Hotel - North Terminal
As mentioned above there are many other hotels to suit varying budgets available in reasonable distance to the airport terminals.

Hotel by Bus offers a quick direct way to travel between your hotel and the airport. Hotels linked by this service are:-

The service costs (as of March 2018) Ł3.00 for adults and a reduced fare for children under 16 and runs to both North and South Terminals.
Buses drop off right outside the terminals and operate 24 hours a day, with the exception of those hotels marked with an * where services run from 04:20 to 23:30.

Tickets can be bought in cash on board the bus directly from the driver, or from the reception desks from certain hotels.

There is a multitude of parking available to passengers; off-site, on-site, meet and greet, airport owned and private. This article only covers the parking provided by Gatwick Airport and not those provided by private companies.

At a similar cost is the Valet Meet and Greet parking where you arrive at an area in the short term parking area hand over your keys and your car is parked in the car park for the duration of your holiday and your car is waiting for you on your return. Typically walk time for these options to your terminal is under 5 minutes. The airport also offers a 'premium' parking option with fastlane security and a Valet Meet and Greet 'Car Care' option where your vehicle is cleaned prior to your arrival back into the UK.

Drop off points for the South Terminal is on level 2 of the RED short stay car park – just follow signs to the valet reception. On your return, phone the valet staff from the arrivals hall and they'll have your car ready for you to pick up back at the reception. The height restriction for this service is 2m (6ft 6in).

For the North Terminal drop off is operated from level 3 of short stay car park 5. Follow signs for valet parking where you drop-off and pick up your car from the same place. Please note that this change means a height restriction of 1.8m (6ft) and a width restriction of 2.4m (7ft 10in).

The airport also provide a number of self-park long term parking areas for each terminal where you park your vehicle in large open air car parks and then catch a bus to your terminal and get a bus back to the car park on your return. Typically transfer times take from 5-10 minutes. Prices for turning up on the day and using long term parking is Ł13 per day for summer 2012, pre-booking will reduce this price.

The airport also provide a 'plus' version of self-park long term parking where similar to a meet and greet option you park in a reception area, leave your keys at the desk, head off on holiday via a transfer coach (takes about ten minutes) and the airport will park your car for you. On your return get the transfer coach back to the reception area and your car will be waiting nearby.

Gatwick Airport has a dedicated train station at the South Terminal which links into London and the wider rail network. Coach links are also available and these tend to use the South Terminal Forecourt as a drop off/collection point, although some coaches will stop and pick up at the North Terminal also. Please check with your coach company for exact details.

If travelling from the North Terminal and arriving at Gatwick Airport by Train (or Coach) you will need to use the airports own shuttle train that travels 24 hours a day between the two terminals in under two minutes. Just follow the signs for the North Terminal (when in the South Terminal) and vice versus in the North Terminal on your return back to the UK.
Bookmarks: