I-94 Form for travellers with a Visa

CBP now gathers travelers’ arrival/departure information automatically from their electronic travel records. Because advance information is only transmitted for air and sea travelers, CBP will still issue a paper form I-94 at land border ports of entry.


Filling Out Arrival-Departure Record, CBP Form I-94, for Nonimmigrant Visitors with a Visa for the U.S.

For those admitted as academic students or exchange visitors (F or J classifications), if you take a short trip (30 days or less) to Canada, Mexico, or the Adjacent Islands, you may retain your I-94 and your SEVIS form I-20 or SEVIS Form DS-2019, so when you resume your visit to the United States you are readmitted for the balance of the time required for you to complete your program.

Both 8 CFR 214.1 and 22 CFR 41.112 contain legal guidance on the procedures for the readmission of a traveler and automatic revalidation of a visa that has expired.
However, because each traveler’s individual circumstances may vary (such as your current status in the United States, foreign destination, and the nationality of the traveler); it is recommended that you contact CBP at the port of your departure and prior to your departure if you have any questions regarding these issues. 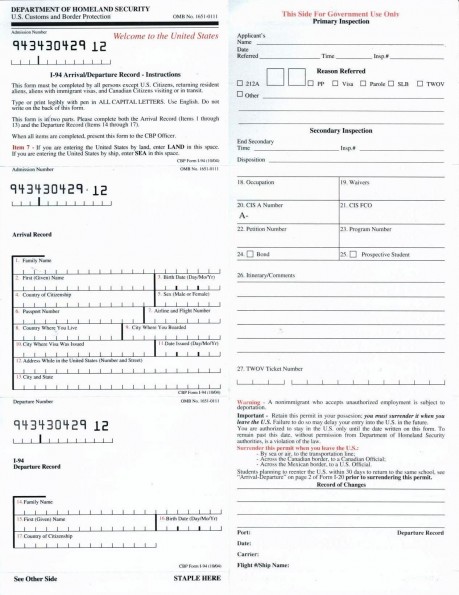