Mako is a 200-foot-tall hypercoaster that reaches speeds of up to 73 mph along 4,760 feet of steel track — nearly a mile long — leaving riders feeling both breathless and weightless. The ride is the tallest, fastest and longest coaster in Orlando.

Mako's tight turns and speed are inspired by one of the ocean’s fastest sharks - Mako sharks, also called “blue pointers”, are known for their top speed, making extreme jumps and the ability to quickly change course as they pursue their prey.

The new coaster will become one of the world’s few true hypercoasters, a group of roller coasters known for high speeds and steep drops and hills that create a feeling of weightlessness.

“On Mako, you’ll experience what it’s like to be this apex predator, surging through the water at top speed and chasing prey throughout a massive reef,” said Brian Morrow, SeaWorld’s attraction creative director. “It will be a wild mix of fear, thrills and fun.”

The entire realm is created to make guests feel like they’re underwater, part of the group of sharks and toothy animals that have taken over a shipwrecked reef.

At night, speciality lights will accent the coaster trains, realm and track, flickering and shimmering, simulating fish being scattered by a mako on the hunt.

Mako uses a unique sound system to enhance the experience, and not just for those on the ride. The full score of Mako can be heard and follows riders out of the station and up the lift hill. Custom surround effects and musical scores fill the realm, changing as the coaster dives through the area. 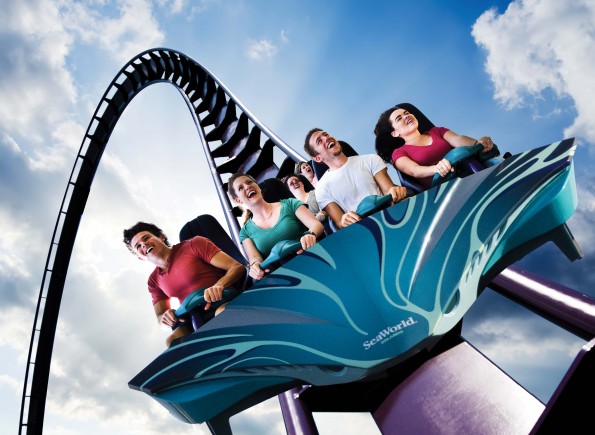