New exhibits at Mote Aquarium created in 2009 include the Seahorse Conservation Laboratory, which displays baby seahorses that Mote staff are raising for other aquariums throughout the United States, and Sea Turtles: Ancient Survivors - an exhibit with live sea turtles and displays highlighting the sea turtle conservation and research at Mote. The Aquarium now also has narrated shark feedings, in which large sharks are trained to go to specific targets for a food reward.

The Dolphin and the whale hospital is one of our favourites!

Meet Mote's Resident Dolphins
Mote Aquarium's resident dolphins, Moonshine and Harley, help educate visitors about dolphins and other cetaceans found in the world's oceans. Moonshine is a pantropical spotted dolphin and Harley is a long-snouted spinner dolphin. Both are commonly found in deep tropical waters and are not animals that you would likely see if you went for a walk along a Gulf Coast beach.

Both dolphins were brought to Mote's Dolphin and Whale Hospital for rehabilitation after they stranded at young ages. After months of rehabilitation, the federal authorities that regulate the protection of wild marine mammals, the National Marine Fisheries Service, decided that the dolphins could not be returned to the wild. Those officials also decided that because the animals were both members of genus Stenella, were extremely social species and could be found together in the wild, they should be housed together for long-term care. 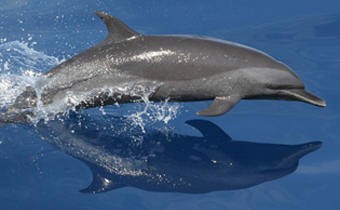 About Moonshine
This male juvenile dolphin was stranded in 2003 in the Florida Keys and found on the beach with a severe sunburn. After several months of treatment by the Marine Animal Rescue Society of Miami, he was brought to Mote for additional treatment. Although Moonshine's sunburn eventually healed following treatment at Mote, a liver abnormality has kept him from being released.

About Harley
Harley is a juvenile female that was estimated to be 6 months old when she was found washed up on a beach on Mustang Island, Texas .Veterinarians think she was separated from her mother, possibly in rough seas. After treatment by the Animal Rehabilitation Keep (ARK) at the University of Texas it was determined that she was just too young to be released. Although experts could show her how to catch prey, they are unable to teach her where to find the prey in the wild or how to avoid predators. Harley came to Mote in March 2005 so she could live with a companion that was a similar species -- in this case, that's Moonshine.

Mote Marine Laboratory & Aquarium Is open to the public and is highly recommended and is suitable for all ages. There is a lot to see so I would suggest you put a day a side, you will be able to view the tiniest little fish right up to the huge manatees. And take advantage of all the education programs available.