Members Photos
There are no member submitted images for this page.

New land invites guests to live their own Star Wars adventures as they take the controls of the Millennium Falcon, enjoy galactic food and beverages, and engage with the land using the Play Disney Parks app 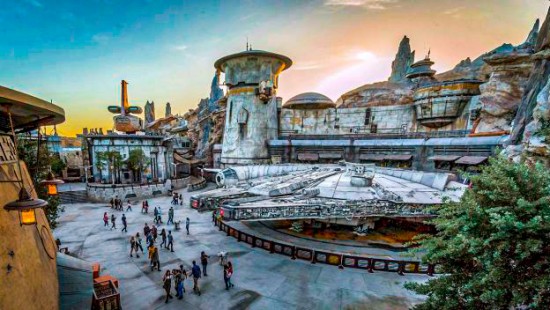 Star Wars: Galaxy's Edge, the highly anticipated new land inside Disney's Hollywood Studios, opens Aug. 29, 2019, inviting guests to live their own Star Wars adventures as they explore a remote planet full of unique sights, sounds, smells, tastes and other immersive experiences. The largest and most technologically advanced single-themed land expansion ever in a Disney park opened at Disneyland Park in California on May 31, 2019.

Guests will be transported to a galaxy far, far away in Star Wars: Galaxy's Edge, on a journey to Batuu, the newest location in a story that began in 1977 with the first Star Warsfilm. Guests will become part of the story as they sample galactic food and beverages, enter an intriguing collection of merchant shops and take the controls of the most famous ship in the galaxy aboard Millennium Falcon: Smugglers Run.

Stepping into their own Star Wars adventures, guests will become part of the action as it unfolds around them, and their interactions with the Play Disney Parks mobile app will deepen their engagement with the land. They may choose to aid a smuggler, join the Resistance or pledge their loyalty to the First Order. This depth of storytelling is part of the total immersion that distinguishes the 14-acre Star Wars: Galaxy's Edge from any other themed land in Disney history.

The new land builds off decades of collaboration between Walt Disney Imagineering and Lucasfilm Ltd., a global leader in film, television and digital entertainment production, including the Star Wars franchise. The work on Star Wars between these two creative powerhouses dates back to 1987, when the groundbreaking Star Tours attraction opened at Disneyland.

Welcome to the Edge of Wild Space: Black Spire Outpost on Batuu

Batuu is a far-flung destination along the galaxy's Outer Rim, on the frontier of Wild Space – the uncharted region beyond all known star systems. The planet is home to Black Spire Outpost, an infamous port for smugglers, traders and adventurers wishing to avoid any unnecessary … entanglements with the First Order.

When guests arrive at Black Spire Outpost, they will come across aliens, droids and other inhabitants of this planet as they search for rare and unique goods, discover unusual food and drink, or join a crew seeking adventures. Along the way, guests may encounter some familiar faces, including Rey, Chewbacca or even Supreme Leader Kylo Ren and his Stormtroopers.

For more than four decades, fans of Star Wars films have imagined what it would be like to blast across the stars inside the Millennium Falcon or race through the halls of a Star Destroyer. Star Wars: Galaxy's Edge will feature two signature attractions that turn those dreams into reality.

In Millennium Falcon: Smugglers Run, guests climb into the cockpit of "the fastest hunk of junk in the galaxy" for their own Star Wars adventures. They take the controls of the Falconin one of three unique and critical roles as the ship hurtles through space. Some will be pilots, some gunners and some engineers, creating multiple ways for guests to engage with the attraction in an experience that responds in real time to the actions they take. As from 19 Feb, 2020 FastPass+ reservations are available.

A second attraction, opening Dec. 5, 2019, at Disney's Hollywood Studios, is Star Wars: Rise of the Resistance, one of the most ambitious, advanced and immersive experiences ever undertaken by Walt Disney Imagineering. It places guests in the middle of a climactic battle between the First Order and the Resistance, including a faceoff with Kylo Ren. Their journey takes them aboard a full-size transport shuttle and then into a nearby Star Destroyer on a harrowing and thrilling adventure that blurs the lines between fantasy and reality.

A Diverse Menu of Food and Beverages Await

What does Blue Milk or Green Milk actually taste like? That question and more will be answered when guests visit Star Wars: Galaxy's Edge and experience the new land's expansive array of food and beverages. Vendors offer various local favorites such as an Outpost Mix of flavored popped grains from Kat Saka's Kettle, a unique popcorn snack with a combination of sweet, savory and spicy flavors.

At Oga's Cantina, even the blaster-bolt scorches on the walls tell a story. Here, guests gather to share their tales from around the galaxy as they enjoy exotic beverages served in unique vessels and listen to spirited musical entertainment provided by DJ R-3X, otherwise known as Rex, the former Starspeeder 3000 pilot droid from the original Star Tours. Rex re-invents himself as the cantina's DJ, and he's as quirky and talkative as ever.

A multi-purpose transport shuttle docked on top of a large hangar beckons guests into Docking Bay 7 Food and Cargo, a designated location for traveling food shuttles. Chef Strono "Cookie" Tuggs is in much demand for his culinary skills, so he moves from site to site in a modified Sienar-Chall Utilipede-Transport that becomes a mobile kitchen and restaurant. His travels across the galaxy allow him to fill his pantry with exotic ingredients he uses to make new and unusual dishes. He is proud to present Tuggs' Grub, a "traveling diner for diners traveling," inspired by dishes he created during his time working for Maz Kanata on Takodana. 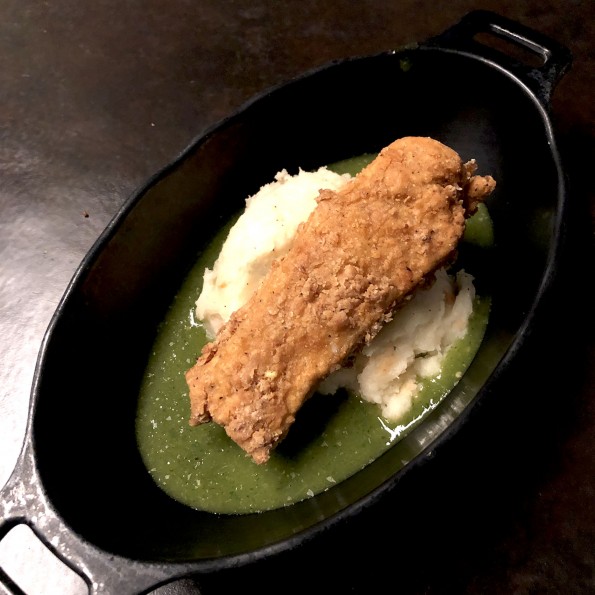 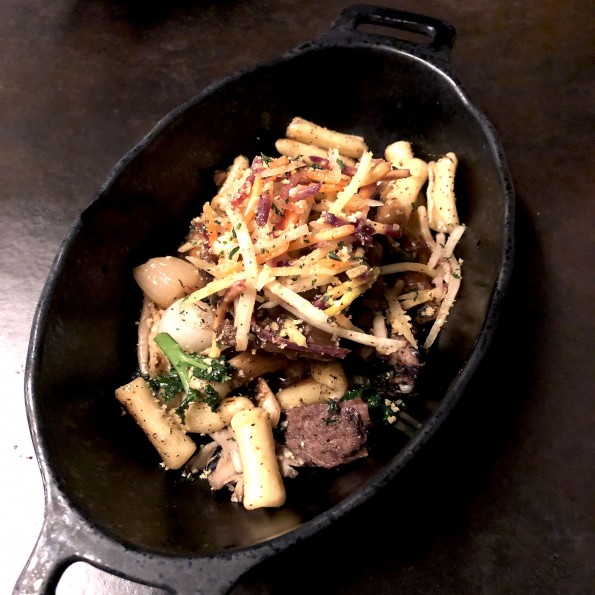 Elsewhere, Ronto Roasters draws attention with its large podracing engine firing up a barbecue pit for mouth-watering Ronto Wraps. When hungry customers queue up to order, they encounter a former smelter droid, carefully turning the spit of meats. Guests can also choose from a variety of exotic non-alcoholic drinks like the Sour Sarlacc or Tatooine Sunset. 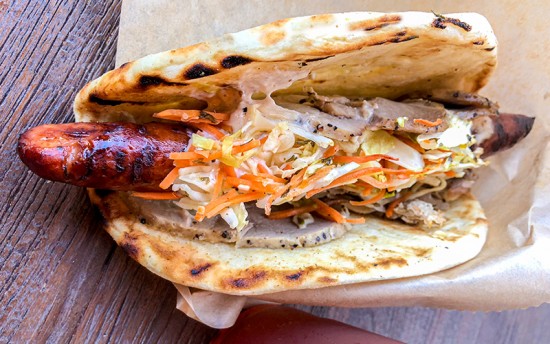 The Milk Stand offers two local favorites – Blue MilkandGreen Milk. Blue Milk was first seen in "Star Wars: A New Hope" when Luke Skywalker sat down for a family meal. Green Milk was introduced in "Star Wars: The Last Jedi" when Luke lived on the planet Ahch-To. Now, thirsty guests can order these colorful frozen drinks as they live their own Star Wars adventures. 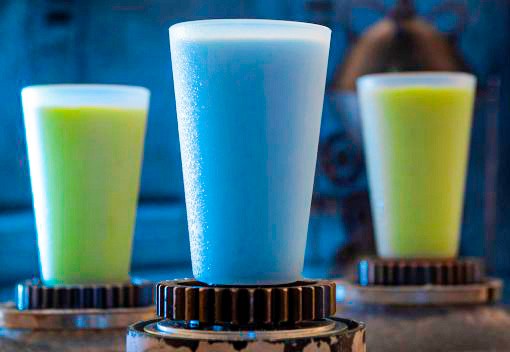 The Droid Depot invites guests to construct their own astromech droids. Patrons pick pieces off a conveyor belt to build one of two core models (R-series or BB-series) and they can customise their droids with various parts and colors. These droids interact with elements throughout the land, enhancing guests' adventures. Additional accessories can be added to further customise these new friends. In addition, the Droid Depot offers pre-built droids, droid-inspired toys and apparel, and more.

At Savi's Workshop – Handbuilt Lightsabers, guests have the opportunity to craft and customize their very own lightsabers. In this mystical experience, guests feel the Force as they build these elegant weapons from a more civilized age.

Inside Dok-Ondar's Den of Antiquities, guests find a selection of rare and mysterious items for sale, representing different eras of the Star Wars galaxy including holocrons, ancient Jedi and Sith artifacts, lightsabers and more. As they explore the nooks and crannies of the shop, guests also see Dok-Ondar at his desk as the large Ithorian checks his inventory and barks the occasional order at his assistants.

In addition to these special experiences, the Black Spire Outpost marketplace features the Creature Stall dedicated to the plethora of rare and fascinating creatures that populate the galaxy, as well as Black Spire Outfitters, showcasing the latest in galactically trendy apparel and accessories. The Toydarian Toymaker stall is full of toys and games crafted by a Toydarian (the flying alien species first seen in "Star Wars: The Phantom Menace"). And all tourists visiting Batuu will want to make a stop at Jewels of Bith, offering "trinkets to treasure" and other accessories.

Guests can also demonstrate where their loyalties lie with the gear and accessories they purchase within the land. Resistance Supply is a "makeshift" location at the Resistance's hidden command post, selling Resistance pins, badges, hats and other accessories to help guests feel like part of the cause. First Order Cargo, meanwhile, is a temporary First Order storage dock easily identified by a never-before-seen First Order TIE echelon ship. The cargo location offers guests a chance to pledge their loyalty by purchasing pins, caps, gear, model ships and more.

When guests choose to use the Play Disney Parks app in Star Wars: Galaxy's Edge, they will be able to transform it into their very own Star Wars: Datapad. Using the app provides new opportunities for guests to engage with the land, such as translating a galactic language or learning what's hidden inside crates and containers.

In addition, guests can use the Play Disney Parks app to interact with elements in Star Wars: Galaxy's Edge, including droids, blinking door panels and antenna arrays. Throughout the day, guests may participate in a multiplayer game throughout the land, "Outpost Control," to support either the Resistance or the First Order. 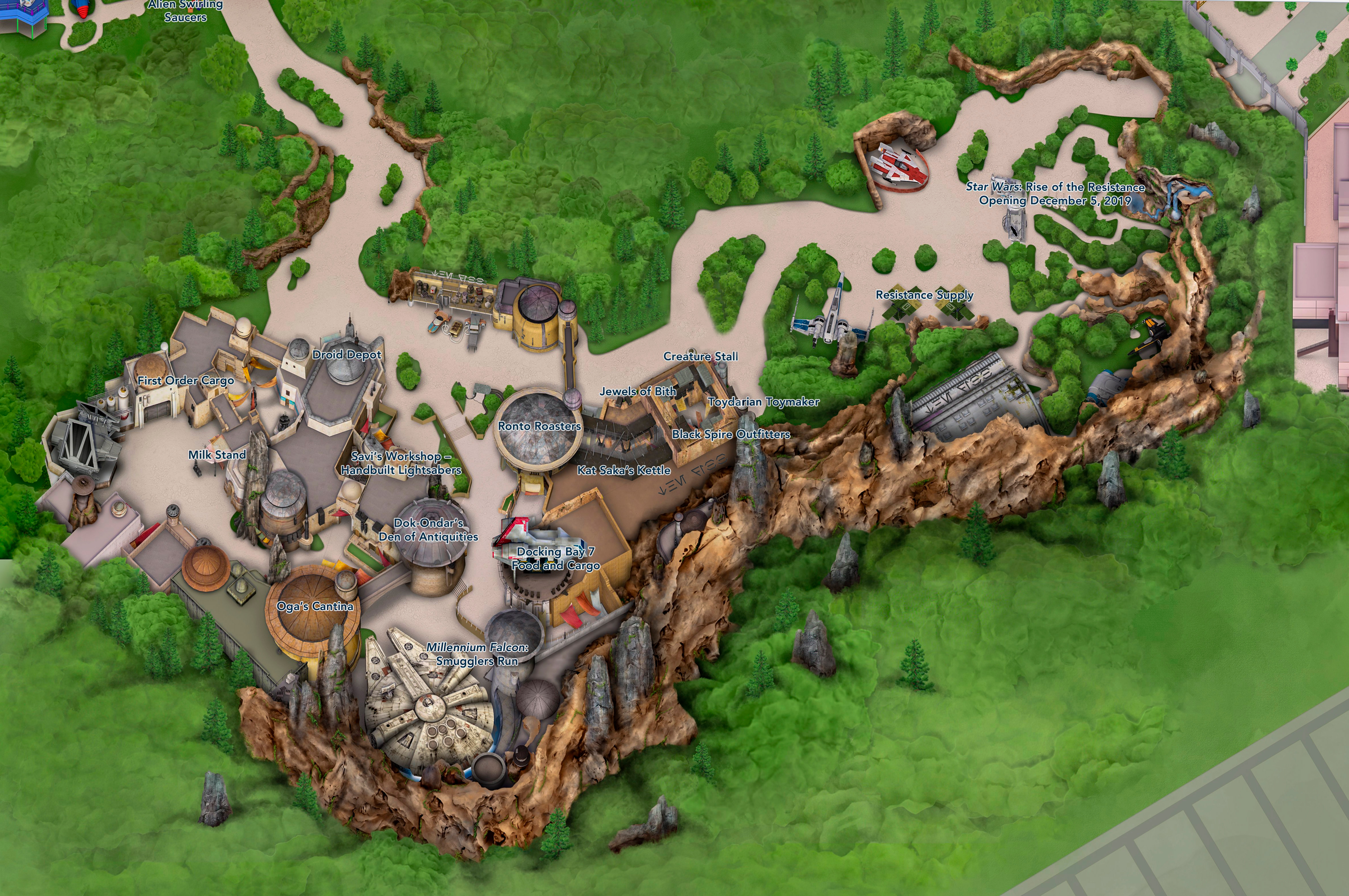