Universal Orlando's Halloween Horror Nights comes to life in a twisted new way with a new show highlighting horror and pop culture greats in the heart of the Universal Studios Lagoon.

2020 marks the 30 years of the world's premier Halloween event, who will be lurking in the shadows this time?
The event "30 Years of Horror", runs from the 10 September through to 1st November. Watch out for this year's Haunted Houses and Scare Zones to be announced. 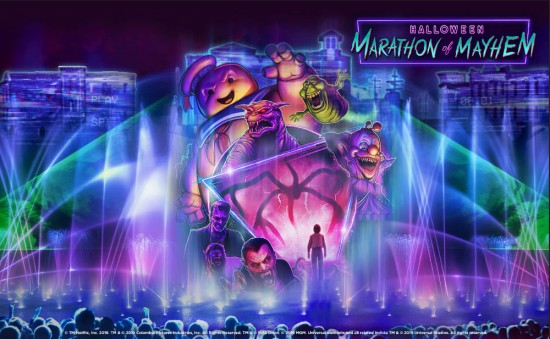 The screams featured at this year's Halloween Horror Nights will come to life in a whole new way with the debut of the nighttime lagoon show, "Halloween Marathon of Mayhem." Guests will watch as terrifying moments inspired by some of the Halloween classics taking over the event come to life right before their eyes in the Universal Studios Florida lagoon.

Due to popular demand and the incredible growth of the event, Universal have announced that Halloween Horror Nights 2019 kicks off September 6 and runs select nights through November 2, bringing the most terrifying names in horror to life in 10 all-new elaborately themed haunted houses, five scare zones, live entertainment and more. And when they need a break from the screams, guests can enjoy Universal Studios most exhilarating attractions and the "Halloween Horror Nights Mobile Game featuring TERROR TRIVIA," where they can test their Halloween Horror Nights knowledge, compete to get their name on the event leaderboards of 11 horror-packed levels and more.

If you can survive all-new haunted houses, spine-chilling street experiences, outrageous live shows, and more. There's no better way to end your day at Universal Orlando® than with the winner of Amusement Today's "Best Halloween Event" Golden Ticket award.

Halloween Horror Nights annually draws hundreds of thousands of horror fans from around the globe to this one-of-a-kind event. Tony Timpone, Editor of Fangoria Magazine, said, "After visiting scream parks across the U.S. for the last 20 years, I can easily say the Universal's is the best in the business... Halloween Horror Nights is the ultimate Halloween experience."

This really is an adult orientated event, and serious consideration should be given to minors visiting.

It is worth noting you don't need a day ticket to experience this event, and many of the park attractions are open.

Another option available is the RIP tour. The queues can be quite lengthy for the houses, even with the front of line passes. If it suits your budget, and you want to see everything, the RIP tour ticket is worth considering.

You get immediate access with a tour guide into all the houses, access to the VIP bar and depending on the current schedule you may get some behind the scenes access - we saw the MIB area in 2014.

Front of Line pass is included too, so if you book an early tour you get that value added as well.

The event takes place each night at the "Monsters Cafe" and includes a dinner buffet for guests, as well as photo opportunities with the 'Scareactors' and one free download of a photo during the experience!

Seating times are available at 5pm and 7pm.